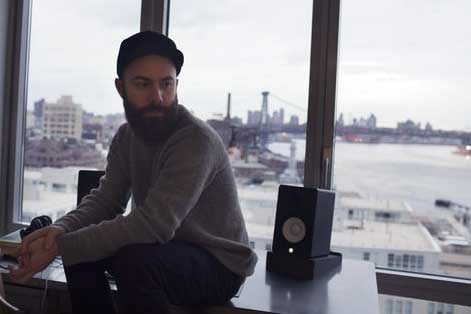 French music video director Yoann Lemoine is best known for his work with Katy Perry, Taylor Swift, and Lana Del Rey. Lemoine also collaborated with Luc Besson on Arthur and the Invisibles. It is rumored that Lemoine began his music career began when Richie Havens gave him a banjo. On stage, Lemoine is known as neo folk musician Woodkid. In March of this year, Woodkid released his first record as an autobiographical album, The Golden Age.

Woodkid begins his album with the reflective “The Golden Age,” which takes its name from the album. A piano begins this track, and later Woodkid enters his symphony, conducted and written by him. The track gains energy as the horns are entered and this momentum is maintained through the second track, “Run Boy Run,” and into the third, “The Great Escape.”

The strings of Woodkid’s symphony introduce this track with a romantic vibe that could be borrowed from a ‘60’s movie. Suddenly the percussion and synthesizer enter, followed closely by the horn sections, creating the image of horses galloping through a field, matching the lyrics, “Tell me that we’ll always be together/ We’ll be riding horses all the way.” I find myself particularly fond of forward-leaning rhythm of this track as Woodkid builds the suspension of the song towards its climax, where the strings eventually close it.

“I Love You” confuses me; it is an upbeat song – the energy is maintained through the percussion section. Yet, if The Golden Age is really an autobiographical album, this track tells of great pain. Woodkid recounts this loss through the lyrics, “As we were dancing in the blue/ I was synchronized with you/ But now the sound of love is out of tune,” and “In the waves I’ve lost every trace of you/ Where are you?”

The song “The Shore” is a resolution to “I Love You.” The uneven minor piano chords draw out the song in the same way that a day would drag on without a lover. Woodkid’s lyrics, “I walked all day along the shore/ I was made for loving you,” reflect the theme of longing. After hearing the lines, “I spend my days without you now/ And the sky doesn’t look so blue,” I am convinced that “The Shore” tells the tale of a love that has died.

The Golden Age descends into darkness with the arrival of track seven, “Ghost Lights,” a synthesizer and percussion dominated piece. It is an eerie track, and I believe it could be music for a horror film, until the horns are entered, picking up the pace and mood of the song. But the dissonant synthesizer is still present, and it upkeeps a menacing tenor.

“Conquest of Spaces” is the most buoyant track on The Golden Age. Woodkid opens the song with a flute line that seems to roll forward as it rapidly arpeggios up and down through the instrument’s range. As the song progresses and the other sections are entered, the flute drifts toward the background, but remains obviously present.

I find “Where I Live” the same as “The Shore” in formula. Again, it is a lamenting track that is dominated by minor piano chords backed by horns. However, “Where I Live” keeps my interest through the strength of the story the lyrics tell “To forget that I never followed/ The man that I adored/ Who promised me pretty sins and gold.” Perhaps it is the story of a failed marriage.

Track 13, “Iron,” is the song that initially propelled Woodkid into fame. As his first single, it was a huge success; “Iron” was featured in trailers for the video game Assassin’s Creed: Revelations, the film Hitchcock, along with the TV series Teen Wolf. This song is dominated by percussion and horns. Together these instruments create in my mind the image of a Roman battalion readying itself for battle.

I find Woodkid to be a fascinating new artist. It isn’t every day that the world gains a pop artist who writes and conducts his own orchestral scores. Congratulations to Lemoine on his first musical success-I anxiously await his next album.