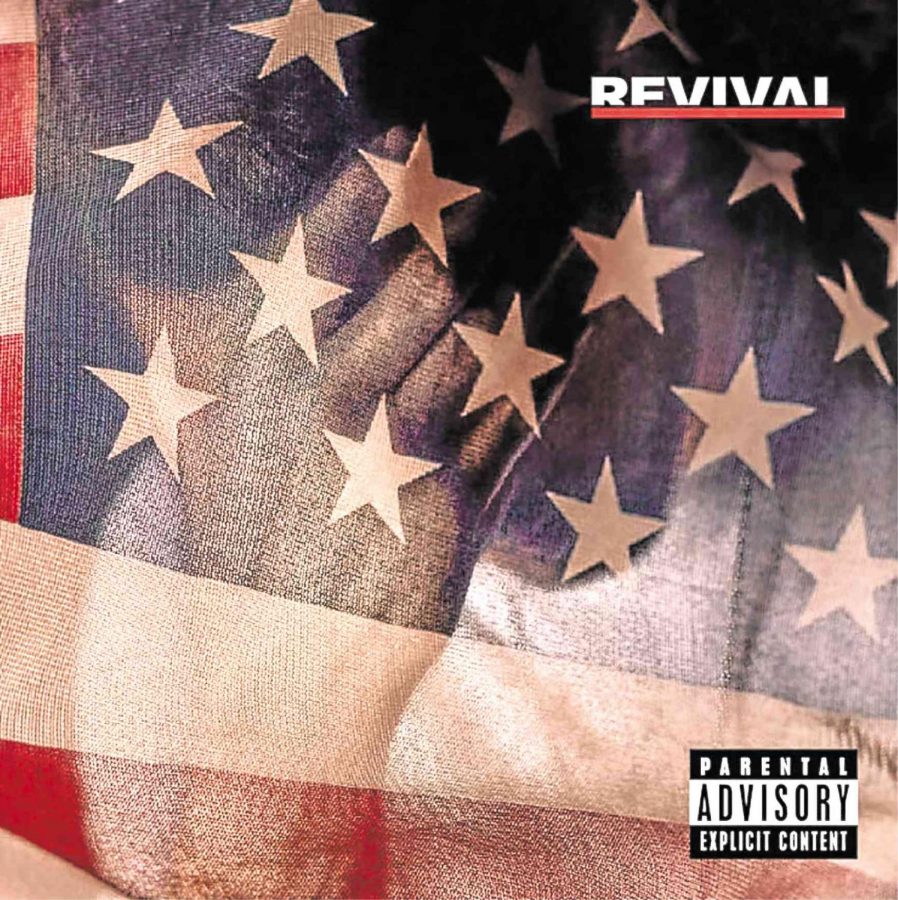 Marshall Mathers III, otherwise known by his stage name Eminem, came out with a new album on Dec. 15, 2017 that finishes the album trilogy of “Relapse” and “Recovery.” This new album is named “Revival,” and it is his first album in four years. The last album released was his “The Marshall Mathers LP Pt. 2” in 2013. Overall, Eminem has been an iconic figure in the hip-hop game due to his breaking of the racial divide in rap. This new album has risen to a more political outlook than an actual hip-hop album.

On Oct. 6, 2017, Eminem did his infamous bar-for-bar freestyle about President Donald Trump with his own views of hate towards him. Using lyrics that basically claim that if his fans are followers of Trump, then Eminem will disregard them, Mathers makes the audience choose sides. This performance was mainly designed to build tensions for his eighth album that was released in December.

This new album, “Revival,” has had controversy with the different political views that are stood upon in these songs.

The song, “Untouchable,” was released a week before the album’s release for the fans’ enjoyment and to build hype for “Revival.” The song itself deals with a multitude of controversies including white privilege, systematic racism, and much more. Within the first verse of this song, Eminem sets up his character as a crooked white police officer pulling over an African American while racially profiling him. Within the mentality of the police officer, he then contradicts himself by saying it is “for the red, white, and blue,” even though the story within the first verse shows the officer murdering an innocent African American. In verse two, Eminem breaks out of character and claims how embarrassed in his own race he is due to the way blacks are treated in society. Moving on to the third verse, Eminem references events within the song, such as the recent Dallas shooting, when law enforcement shot and killed Micah Johnson. He calls out America itself for using a system in which the African American citizen is designed to lose.

The day the album released, media sources released articles on the Internet ranging from how terrible the album is to how genius the album is. This album, compared to his previous albums, varies within his style of rap. Over the years his rapping style has changed and evolved with the youth of the country. In previous albums Eminem does not rap about politics much, which differs from this album because this release is mainly an anti-politician rant about Trump.

Most media sources, such as “The Guardian,” claim that Eminem created an album that has “Tiny twitches of genius…but to get there you have to wade through acres of bad gags, filler, and formulaic fury.”

From the perspective of “The Guardian,” “Revival” is an album full of apologies as well as containing a song about killing someone. Although sources such as “The Guardian” claim how Eminem’s new album is not his best work, other news sources see “Revival” as another record-breaking album. “Billboard” assumed that during the day after the album was released the album would be a hit due to the hype built up previously.

In the past, Eminem’s albums were more on the side of only hip-hop beats and freestyle. In “Revival,” however, there is a multitude of pop singers who collaborate with Eminem. Beyoncé makes an appearance in the first song on the track, “Walk on Water.” Ed Sheeran makes an acoustic appearance on the fifth track on the song, “River.” Alicia Keys also sings in the ninth track of the album, “Like Home.” Pink makes a feature on the sixteenth track on the album, “Need Me” too. With these features comes a new style of hip-hop to Eminem’s typical style of music. This could possibly bring a more pop-style fan base to Eminem due to these musical guests instead of the typical hip-hop fans. As well as these pop singers in “Revival,” Eminem uses the soundtrack to the song “I Love Rock ‘N Roll” by Joan Jett and the Blackhearts on the song “Remind Me.” These new additions to Eminem’s rapping could be either good for Em or detrimental.

Although there are mixed feelings on “Revival,” fans still enjoy the new sound of Eminem. Between the political accusations from Eminem to President Trump, new pop features, and the new Slim Shady (Eminem) representation, this album is definitely different within his 30-year career.