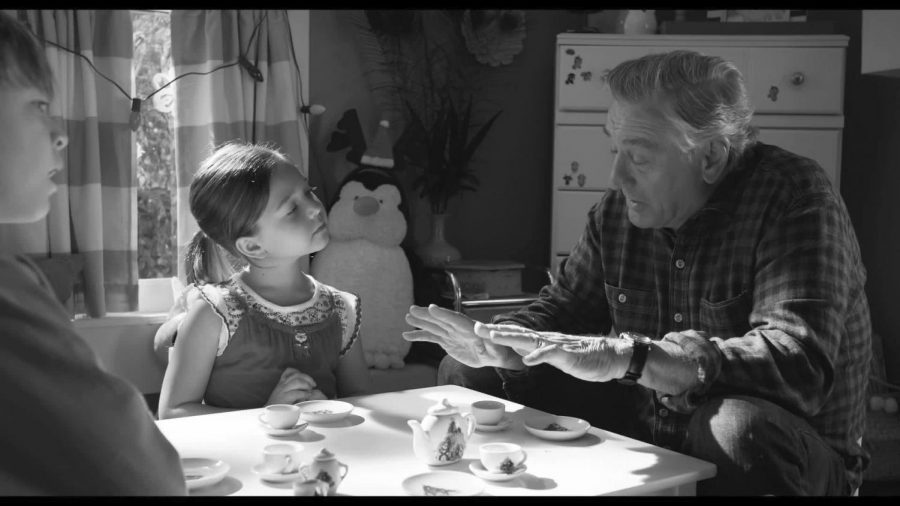 Based on the book written by Robert Smith in 1984, The War with Grandpa, directed by Tim Hill, stars Robert De Niro as Grandpa, who had to move in with his family. He takes the bedroom formerly belonging to his grandson, Peter, played by Oakes Fegley, who is displaced into the attic.

Peter, along with his sisters Mia and Jenny (portrayed by Laura Marano and Poppy Gagnon, respectively) at first welcomes his grandfather to the home. However, the ten-year-old boy soon declares “war” on his Grandpa, who is also displeased that his ever-watchful daughter–Peter’s mother, Sally (Uma Thurman)–has side-lined his independence and essentially forced him to move into the young boy’s bedroom.

As Peter and Grandpa trade pranks, they agree to keep the rest of the family oblivious to the chaos the bedroom spawned. There are some close-calls, specifically between Grandpa and son-in-law Arthur, played by Rob Riggle, with whom Grandpa has shaky yet amiable relations. The two combatants do eventually enlist their various cohorts, going to them to complain and plot or to recruit them as reinforcements.

This film shows a lifelike side to family warfare that’s rarely presented, with the rivals remaining on good terms. Regardless of how Peter and Grandpa remain friendly despite the conflict, everything comes to its climax when the prank war accumulates unintended, physical damage.

The War with Grandpa also shows a more life-like family-where there is conflict, but it’s rather tame, and the family doesn’t splinter over every petty thing. Even when they’re squabbling, Peter and his Grandpa aren’t impossibly melodramatic for their respective ages and don’t hate each other, allowing both serious and heartwarming scenes to speckle between each prank. Grandpa even overlooks the prank war for an entire day to take Peter fishing.

The wholesome romp is enjoyable for anyone, no matter the age, with few plot holes and realistic storyline perfect for viewers seeking a down-to-earth comedy without extravagant effects. I adored the breath of realistic sweetness The War with Grandpa brought to the theater. While other comedies tend to use sophisticated, over-complicated Rube-Goldberg-esque pranks, that would never work in real life, this film uses simple, yet hilarious practical jokes that anyone could implement in their own war.