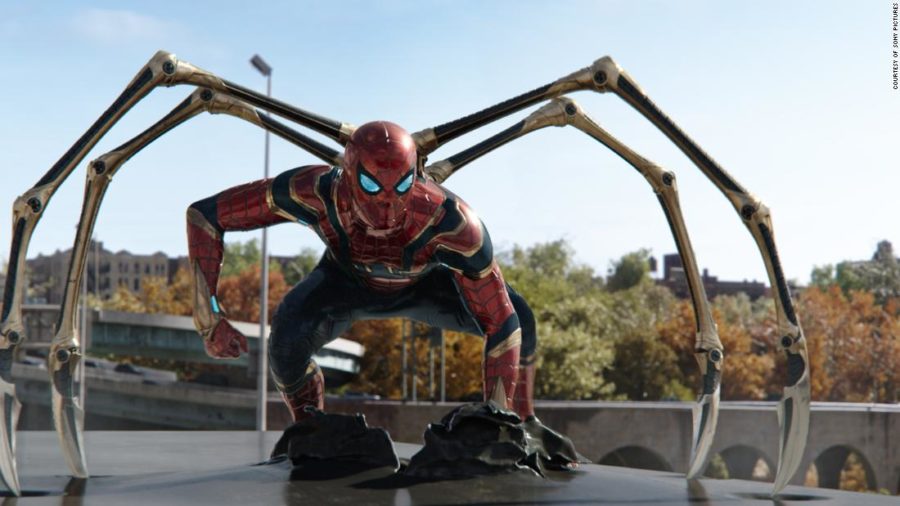 Tom Holland returns to fight a vast array of super villains in "Spider-Man: No Way Home."

Directed by Jon Watts, “Spider-Man: No Way Home” is an astounding addition to the Spider-Man universe. The movie was released on Dec. 17 and is only available in theaters currently. Despite some negative reviews, ¨Spider-Man: No way Home¨ scored a 94% with the general critics and an astounding 99% within the audience score on Rotten Tomatoes. On top of the high score, the movie received a jaw-dropping $253 million haul.

To sum up the plot overall, ¨Spider-Man: No Way Home¨ entails Tom Holland, playing Peter Parker or Spider-Man, in a world in which his identity is compromised. With the newfound knowledge, Parker is no longer able to separate his normal life and superhero identity. In desperation, Parker asks Doctor Strange, played by Benedict Cumberbatch, for assistance in gaining back his split identity. As a result, Parker is faced with new foes, forcing him to discover what it truly means to be the superhero behind the mask.

To go over the negatives, while the new sequel performed amazingly between the audience views and money hauls, it lacks creativity when comparing it to the other movies. From movie to movie, Parker is treated as a child, unable to get out of the cycle of childish beliefs. The more grown-up and developed Spider-Man is moving further and further away. Looking at the last three Spider-Man films, they all do not have their own identity, all seemingly identical in terms of the fighting scenes, magic instances, and the behavior of the actors.

In a more general sense, ¨Spider-Man: No Way Home¨ does not fall under the category where third entries are plagued with problems. Within filmmaking history, Hollywood has tended to favor trilogies, resulting in quite a few sequels to previous films. With this continued method, many trilogies have scored a negative reputation. One example of the downfall includes ¨Blade Trinity,¨ acting like the weakest of the franchise. Within this plague, filmmakers put excessive effort into focusing on the lore and pay-offs, instead of on the good story at the moment. However, ¨Spider-Man: No Way Home¨ keeps a consistent yet entertaining run, unlike other trilogies during its time. Throughout all three films, the movie continues the stimulating entertainment for all ages. The movie adds a new, small element to keep viewers interested while continuing the friendly neighborhood web-slinger that many know.

Compared to the previous films, Parker gets to experience Strange as a new parental figure. Both Tony Stark and Strange are larger-than-life mentors for Parker. Both figures are shown to make rash decisions, valuing their judgment over others. In this sense, both have made a large impact on Parker´s life, making the teenager how he is currently.

With all the small critics and reviews considered, the bigger message within the film is the value of redemption over pure revenge. Although there are plenty of fighting scenes within the movie, the film is not geared towards destroying the enemies, rather finding ways to help them instead. This message gives out a powerful and unique view of the whole trilogy.

Overall, there are many negative reviews towards ¨Spider-Man: No Way home;¨ however, the film continued the action-packed and emotional series that Marvel fans have grown to love. Along with the movie being a successful sequel to previous films in terms of entertainment, it also drives home a message to all viewers that is valuable in this day and age. These lessons can be applied to individual lives, which only deepens the success of the movie.