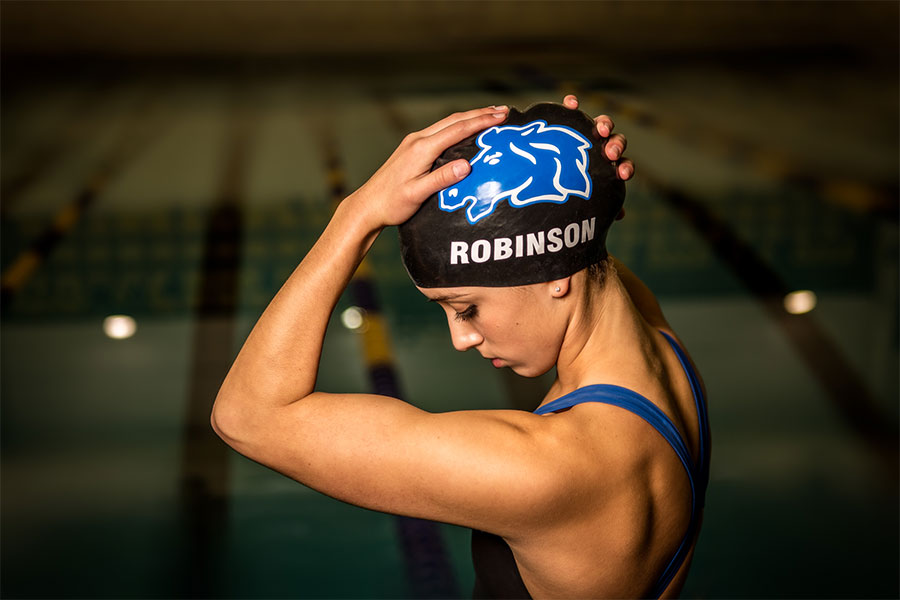 "Swimming takes determination and respect for the sport if you want to succeed..."

During her interview, Robinson was sitting on a bench at the Sheridan swim meet. It was homecoming weekend and senior night for the SHS swimming and diving team. Robinson had dripping hair and was sitting on a towel, talking and laughing with her friends, exemplifying her wonderful ability to balance competitiveness with fun.

Robinson started to swim competitively in junior high. Currently, Robinson is a captain on the Sheridan swim team, competing in the 100 butterfly, the 400 freestyle, and the 200 meter independent medley. This year, she qualified for state in the 100 meter butterfly at the first meet of her season. She qualified for the 400 freestyle this Friday by seven seconds and is only two seconds away from qualifying in her independent medley.

During the winter and the spring, Robinson participates in both indoor and outdoor track, running the 800, 1600, and 4×800 meter relay. Last year, she ran on the indoor 4×800 team and helped them place eighth in the state meet. Robinson is motivated to keep running by her teammates and the people she meets during competitions.

Robinson is valued not only for her athletic ability, but also for her enthusiasm and leadership. Swimming and track teammate, Raien Emery, stated, “Cassandra has that certain kind of sweetness that just makes everybody feel good when they’re around her.” Emery lightheartedly added, “Also, the girl’s got swag!”

Another friend and fellow trackster, Gabby Edeen, happily spoke about Robinson: “Cassandra’s one of the most beautiful fish in the sea. And no one can catch her because she’s so fast!”

Edeen’s comment on Robinson’s beauty, inside and out, was enforced by the school’s selection of her as the 2014 Homecoming Queen. Robinson was a humble and deserving candidate, and worthy of her title.

After high school, Robinson hopes to attend the University of Washington in Seattle to study to be an orthopedic surgeon. Robinson is confident in her career choice: “I’ve known what I’ve wanted to do since I was little… My dad has been an influence on me. He works in the E.R. At first, I wanted to do that, but I changed my mind.”

In college, Robinson does not plan on swimming competitively, but she has plans to train to run a marathon. To continue her active lifestyle, Robinson plans on spending as much time as possible snowboarding.