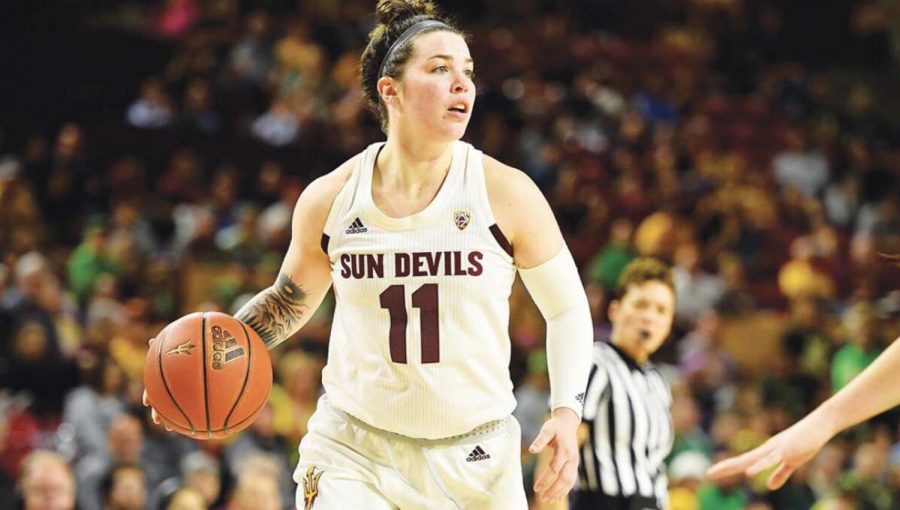 Arizona State Sun Devil Robbie Ryan waits to set up offense while looking for an open pass to one of her teammates on Jan. 10 against #3 Oregon.

Within the state of Wyoming, Robbi Ryan is a name well known throughout athletics. Ryan played basketball, soccer, and volleyball as a Lady Bronc, excelling in all three. She led her and her teammates to a successful season every year, and all-stated in every sport, including winning Gatorade Player of the Year three times: twice in basketball and once in soccer. Ryan also went on to be named Ms. Wyoming Basketball 2016.

At a young age, Ryan knew that her one true love was basketball. As a freshman at SHS, she made the varsity basketball team. Throughout her four years, Ryan took every opportunity for excellence. She was invited twice to the U17 Olympic trials for women’s basketball and competed in the Chicago Nike National Invitation Tournament. With Ryan on the team, the Lady Broncs made it to state each year, always finishing as one of the top four teams in the state. During her senior year, she broke the school record with 50 points in one game against rival Campbell County.

Due to her athletic abilities, schools contacted Ryan, offering full-ride scholarships to play Division I basketball, including Arizona State, Colorado, California, Nebraska, Oregon State, Utah, and others. Arizona State stood out the most to Ryan, resulting in her decision to sign with the Sun Devils.

Now a senior at ASU, Ryan has accomplished several things throughout her career. “I’ve become more confident in my skills, learned new skills, and have really grown as a leader,” said Ryan. During her freshman year, she played in every game and started in 12. She finished third on the team in three-pointers, fifth in scoring, and averaged 2.9 rebounds per game, along with 1.6 assists. Since then, Ryan has earned All-Pac-12 honorable mention and Pac-12 All-Defensive honorable mention recognition from the league’s coaches in 2018. She also earned Second-Team Pac-12 All-Academic honors in 2018. Another feat of Ryan’s is that she recently reached a career high of 1,000 points on Jan. 24.

This season, the Sun Devils have grown and won critical Pac-12 conference games. The team took down #3 Oregon and #9 Oregon State, all within the same weekend. “My favorite game is the Oregon State game so far because it was a great team win, and we did something not a lot of people thought we could do,” said Ryan. As the season progresses, the Sun Devils hope to continue playing well, especially when it matters. “We just hope to get better every game and make the final four,” said Ryan.

Reflecting on her college career, she has learned to become selfless and driven in all aspects of her life. “It’s not about you,” said Ryan. “It’s never about you; it’s about what you can do for others.” In terms of basketball itself, she believes that it is all about putting the work in and not about how skilled you are. “At the end of the day, it’s about how tough and relentless you’re willing to be.”

After college, Ryan hopes to play professional basketball. With a degree in Psychology and a minor in African American studies, she graduated in three years and is currently working in the Higher and Postsecondary Education Masters program.

Ryan’s dedication and success within academics and athletics has inspired SHS and the surrounding community. Although several years have passed since Ryan set foot on the court to play for the Lady Broncs, her legacy continues to push athletes and remind them that through hard work, anything can be achieved. She is blessed to have grown up in Sheridan, Wyo., and will continually thank everyone at SHS for supporting her and helping her get to where she is today.