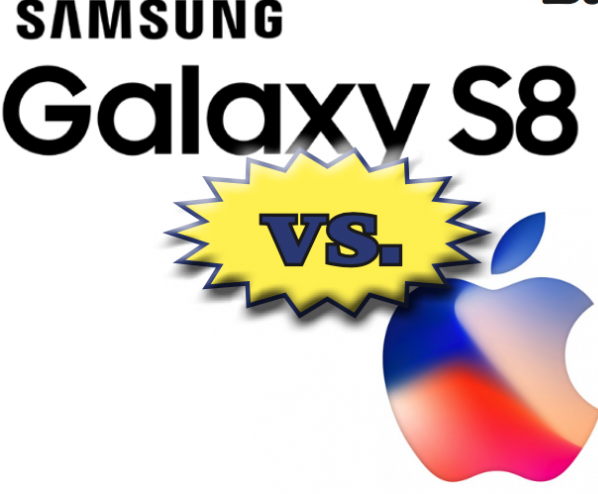 In today’s society, many people carry smartphones. Consumers have many brands to choose from, however, two brands stick out above the rest: Samsung and Apple. Of these two manufacturers, Samsung is a far better choice.

Both companies have their “flagship” models: Samsung’s Galaxy S8 and Note 8 are comparable to Apple’s iPhone 8 and iPhone X respectively. The Galaxy S8 and Note 8 have larger display sizes than their competitors. The S8 has a display size of  5.8 inches compared to the iPhone 8’s display size of only 4.7 inches. The larger Note 8 has a display size of 6.3 inches opposed to the larger iPhone X’s display that measures only 5.8 inches. Samsung’s smaller phone has a display that is the same size as the larger iPhone. Larger displays are a huge win for Samsung. Some people will go with the smaller phone because it’s easier to hold on to.  However, with a big screen, more information can be seen at once, which increases the practicality and usefulness of the phone.

Samsung has also provided their phones with a much clearer screen resolution. The S8 has 570 pixels-per-inch (PPI), and the Note 8 has 521 PPI. The iPhone 8 has a display resolution of only 326 PPI and the X has a 458 PPI resolution, both of which are not as clear as their competitors.  The iPhone 8 has a 42.8% lower pixel count than the S8; the iPhone X has a 12.1% lower pixel count than the Note 8.

Samsung has also provided accommodations for those who want their cellphones to be a little more personalized. The Galaxy S8 is available in six colors: Midnight Black, Orchid Gray, Coral Blue, Arctic Silver, Maple Gold, and Rose Pink; the Note 8 is offered in four: Midnight Black, Deepsea Blue, Orchid Gray, and Maple Gold. Junior Eli Linden said “From previous experiences with like Apple, I feel like this [Galaxy S8] is more customizable,” Linden began. “You can change the themes, how it works, you can do more with it. You can customize the camera. Overall, it’s just way better than any phone I’ve ever had before.”

Other than a larger display, better resolution, and many more color options, Samsung has released a new feature with their Galaxy S8 and Note 8: iris recognition. This is an improvement upon something that Samsung has experimented with in the past. Previously, the company equipped their smartphones with facial recognition, however, it was not very accurate and it was used as a secondary security method. However, now with the S8 and Note 8, Samsung has improved upon this idea and created

an iris recognition security feature, which is used as a primary method of security; gone is the fingerprint sensor that takes up a lot of display space. The iPhone X, which has followed Samsung’s footsteps has also removed the fingerprint sensor, however the screen is still smaller than the Note.

Above all else, Samsung’s smartphones are cheaper. A brand new iPhone 8 costs upwards of $950, while the S8 will only set a buyer back by about $750. The iPhone X costs even more; retail is in between $999 and $1,100. Samsung users pay less for a larger display, a more clear display, more colors, and improved technology.

Samsung produces better quality smartphones with better technology. Apple is a name-brand.  People recognize it easily. Just like brands such as Nike, Under Armor, etc., people will be drawn to Apple as another name-brand. Some people buy Apple products not because they believe that Apple produces better tech, but because they recognize it easily. Senior Brandon Fitzpatrick said, “Both iPhones that I had eventually just quit working.” Samsung has consistently produced more advanced tech before Apple gets around to manufacturing something similar.

Apple products are devices spread world-wide and are also available in a massive selection from phones, laptops, headphones, tablets, watches, Smart TV’s, and more, whereas Samsung falls behind with considerably fewer products.  Apple really is a superior company to all other brands for a multitude of reasons and show it with all of their products.

Apple has conquered Samsung for decades by selling a significantly vaster amount of product. Apple is a company that has yet to be beaten. The company has had fewer setbacks for malfunctioning products as well, where several of Samsung Galaxy Note 7 phones exploded, even causing harm to their customers. A man in Winnipeg had even ended up in the news after his phone started to feel warm in his pocket, and upon removing it, had the phone explode in his hands, causing severe burns.

Apple products also contain higher quality. Their products have been proven to work faster, have a higher camera quality, sensoring up to 12 megapixels and have better service. The camera has incredible camera depth perception and stabilization, making it easier to take a selfie without blur and an unfocused subject.

It is easy for Apple users to connect to their other products and linked accounts through Apple, Google, and other sites; Apple gives iPhone users convenient ways to talk with one another through apps such as Facetime, where they can talk face to face in real time with high camera quality, all you need is their phone contact. They also have iCloud, which saves, stores and keeps track of everything in your phone and other devices. Alongside everything else that the products already come with, they also have the ability to download other apps for communication, such as Skype.

“I have an iPhone but I also have a Samsung tablet, I think it is really just what you prefer,” said senior Kaleb Anthony. “But Apple’s updates make a lot of changes where Samsung’s really don’t.” Apple comes out with updates for iOS, an operating system for phones run by Apple, multiple times a year to fix bugs and add new features. Samsung is run by google, so unlike Apple, who runs everything of their own, Samsung gets wield in with outside companies.

On top of everything else, iPhones have a longer lasting battery life of four or more years. The Samsung phones also need a completely new battery after one or two years, which is really a pain. If you travel a lot, a long lasting battery is extremely important.

Apple also keeps up with their demand by creating a new phone every year. They also have a line of laptops that many use for school, home, teaching, or just their work in general, making them fast working and small enough so it is a major convenience for many. The newest iPhone, iPhone X, also has a plethora of interesting new updates and features, such as emojis that recognize your face and change along with your expressions and record your voice, it also has facial recognition instead of a home button.

The new camera also has editing features that no other phone or tablet has, such as sharpening the subjects and blurring or blacking out the background for portraits and more. Alongside these new features, it also has facial recognition instead of a home button.

Junior Morgan Rogers was a past Samsung user, and now a proud owner of an iPhone X. “The screen quality and size are so much better and bigger, it gives you more room,” she said. “The new camera quality is amazing. My buttons on my Samsung just stopped working, and when I told the company about it they said they would send me a new one and never did.” So on top of the huge pluses to the new iPhone alone, Samsung has also given bad customer service. When asked if she would ever go back to Samsung Rogers gave a strong no.

With everything being said, it is safe to say that as Apple continues to soar high above other competitors it is clear why Apple is a popular choice for many, and will continue to be so.