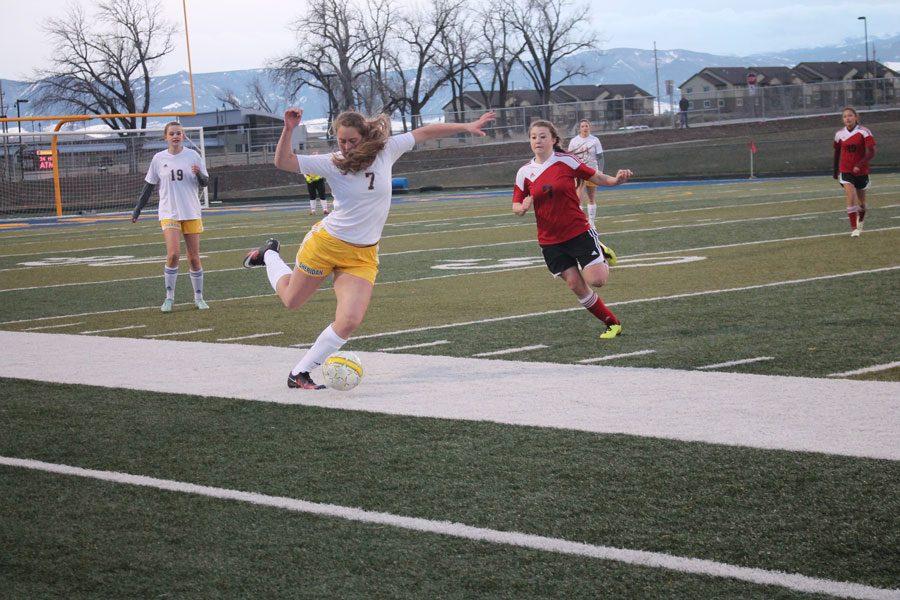 Freshman and varsity player Jordan Christensen kicks the across the field towards the opposing goal.

Girls kick it up a notch 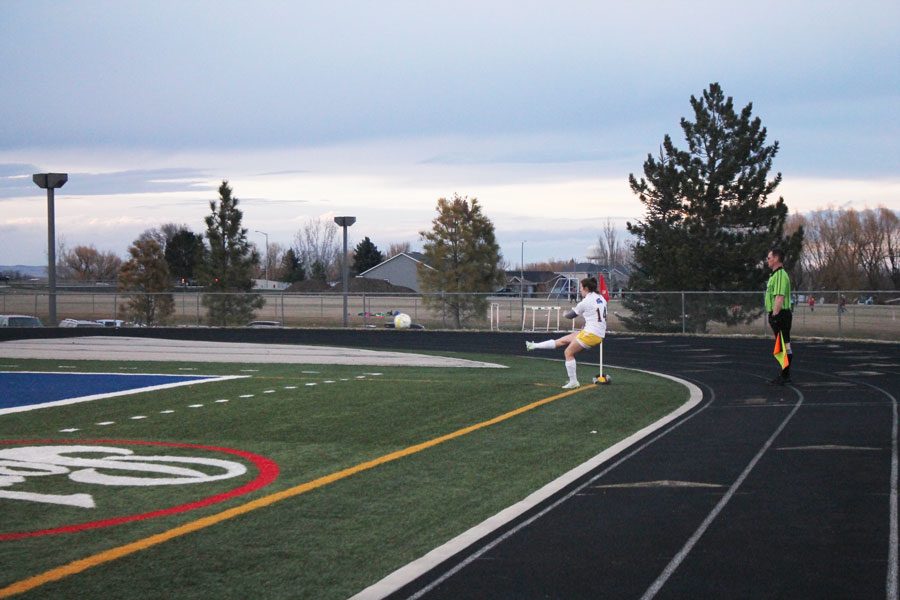 Senior Jamy Shassetz performs a corner kick after the ball was knocked out of bounds.

The 2016 girl’s varsity soccer season started off with their first home game on March 24 against Riverton, Wyo. The victory went to Sheridan with the final score of 10-0 and gave the team a positive start to the 2016 spring soccer season.

The varsity girls coach for this season is Mallary Marshall, and the goal coach is Nick Morton. For the JV girls, the coaches include Stephanie Penrose and Ashley Cooper. Seniors on the Sheridan High School soccer teams this year include Katelynn Brooks, Sara Von Krosigk, Jamy Shassetz, Robbi Ryan, Caroline Chase, Lauren Passini, Mikaela Moore, and Mackenzie Dougherty. The small number of seniors on the team may give the girls an advantage for more leadership place.

“[Soccer] is a wonderful game that brings people from all ethnicities and walks of life together,” said senior varsity player Katelynn Brooks. “It’s exciting to take part in something so loved around the world.” She’s been playing since freshman year and is looking forward to her last season on the high school team.

Boys go for the goal 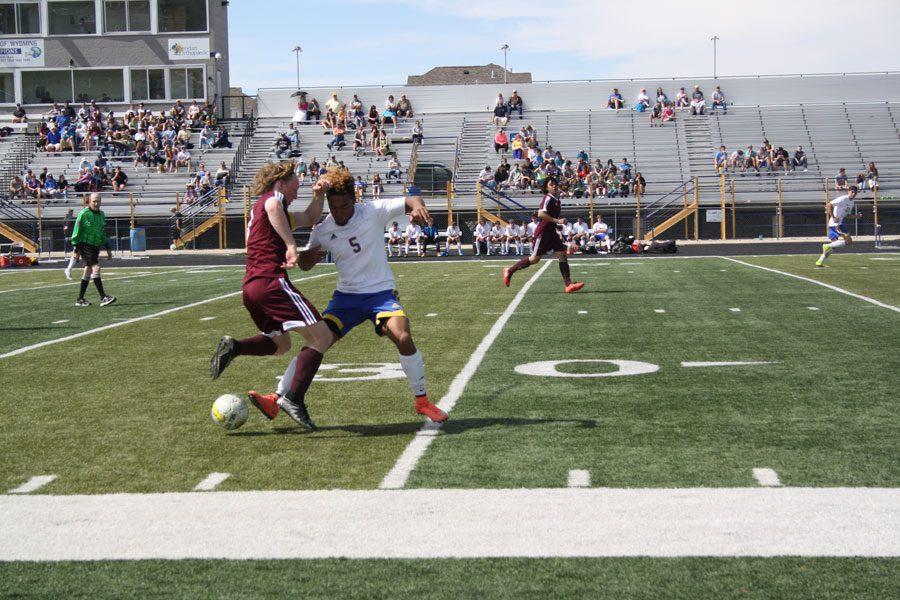 Senior Dontae Crow attempts to steal the ball from a Laramie opponent.

The 2016 boys varsity soccer season starts off with a win over Riverton with a score of 3-0 on March 24. In Riverton Wyoming. The Varsity team also took a win over Natrona with a score of 2-0 and a win over Evanston 3-1 in Casper Wyoming on April 2. This year, there will be many seniors playing on our school soccer teams, including: AJ Kassen, Ben Bonnet, Bryce Beicher, Dontae Crow, Evan Coon, Riley Sessions, Wayde Phelps, Wyat Dobbs, Dalton Legerski, Steven Nicholson, Zach Campbell, Jorge Albuja, Bailey Bonnet, Matthew O’Kelly, Carlos Fernandez de Cordova, and Kodi MacDonnell. Coach Matt expressed his excitement for all the newcomers and the returning seniors, saying, ”I expect them to try, give their effort, and work hard. I want to see the desire and willingness to get things done.” The impressive amount of seniors poses a question for the future of the soccer team in regards to their performance when the seniors leave, but Johnson is confident in the abilities of each team member.

Outside of the coaching atmosphere, Coach Matt relates to the players because he also enjoys playing soccer. “It’s an elegant sport,” said Johnson. “The ball moves, the players work together, the runs are made in order to create that goal scoring opportunity or to prevent other teams from scoring well.” He hopes that this year the team can create a stronger bond of communication and improve their consistency of winning games.

“Soccer has taught me the benefits of teamwork and it challenges me to keep great communication with all of my team members,” said O’Kelly.

The team motto this year is “nothing’s given,” meaning that players need to work hard to accomplish their goals because it will never will never achieve them without effort.

The Ocksheperida • Copyright 2023 • FLEX WordPress Theme by SNO • Log in