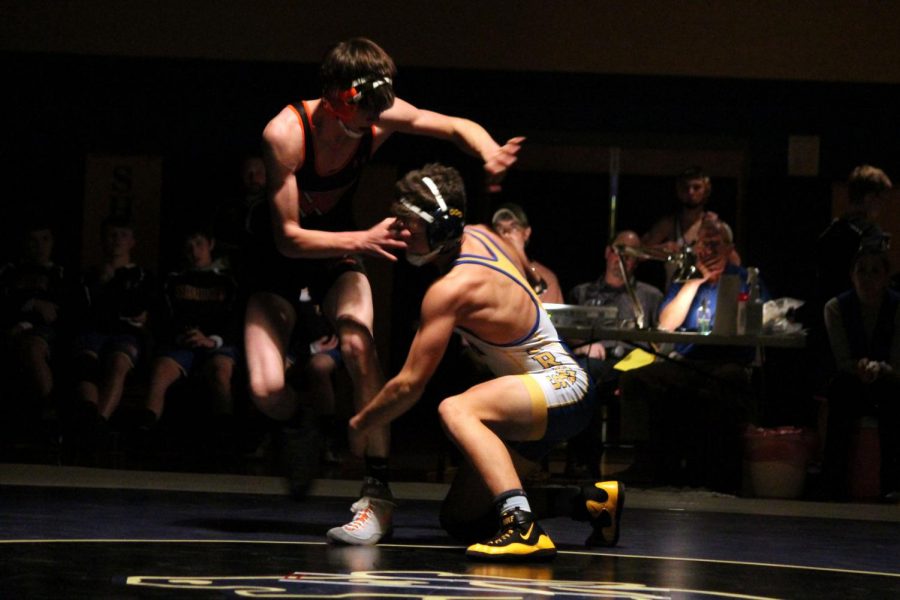 After Thanksgiving break, while the students of Sheridan High School headed back to learning, a select group came back ready to start this year’s wrestling season, and with a new bunch of seniors leading the pack, the team has set themselves on the path of training to fight.

Head coach Tyson Shatto starts off each practice by talking to the wrestlers. “It’s a mindset, and they just have to understand their process and fall back on their training,” said Shatto. The team discusses what they have planned and what their routine is going to look like. Then the athletes move into working on light drills to keep their heart rates up. After warming up and preparing for their practice, the team begins to work on their technique for a majority of their time. The end of their practice consists of live matches and putting themselves into scenarios they might find themselves in during a match.

“We always practice like we are in second place, but we wrestle like we are in first,” said senior Chance Quarterman. Pushing themselves is a key factor into staying on the path to victory during the season. From two-a-days to cutting weight, the wrestlers are constantly challenging themselves both physically and mentally. “When we are practicing, everybody is going as hard as they can every single time,” said Quarterman. This sport requires a lot of practice and the athletes are constantly working to ready themselves for any obstacle they might face against their opponents.

Sacrifice is a huge part of this sport and is something that the whole team has to participate in. “Everyone has to eat healthier, and some people have to eat a lot less so that they can make weight,” said sophomore Joel Sayer. “You’re very tired, so it takes a lot more to do your school work.”

Though this may seem difficult, it is normal and helps the wrestlers achieve their goals throughout the season. The mindset of the athletes helps them through these challenges. “It’s pretty simple: having a good mindset that losing is not acceptable,” said Quarterman. “Fight for everything and do the little things.”

This year the team is filled with several younger athletes, but this does not stop the team from working to better themselves. “Not all roles are equal but all roles have equal value,” said Quarterman. Even when athletes are not wrestling for their team, they are still helping through supporting their teammates when they need it the most. Athletes that are wrestling help the team out by focusing on the little things. Staying off their backs and not getting pinned, and getting bonus points are some of the ways to boost team points. “On the bus on the way to a match, players that aren’t cutting weight can keep eating and drinking down to a minimum to help people that are cutting weight,” said Sayer. These little things help keep the teams stress levels down.

Having a coach that has been involved with the sport for about 27 years of wrestling is a boost for the team. Experience is favored in the sport, and that is what each member is training for. “Every year brings a unique dynamic to it in the fact that it’s always starting over even with your betterment, it’s a new year, a new weight class and a new situation,” said Shatto. The team betters themselves every day and works through the process of reaching their goals. “They are working hard as a team to better their technique, better their skills and better their conditioning,” said Shatto.

The team set simple goals with big meanings this year. Some athletes are set on making it to state, and some are shooting to place in the top spots this year. Each goal is followed by hard work from each team member. “We are really working hard to build on the team dynamic of just creating a family atmosphere and better each other each day.” said Shatto.

This year the team will compete at state in the Casper Event Center on Feb. 23-24. “For my team, I feel like if we keep working hard like we are working, and keep our mindset good, there is no limit for us,” said Quarterman. “I feel like we can go and dethrone all these top teams.”